Control the strength of a colour

This exercise illustrates a technique, varying camera exposure, which can allow the strength of a colour to be controlled.

The instructions were as follows.

Find a strong, definite colour and adopt a viewpoint that allows the colour to overfill the viewfinder frame.

Use your camera’s meter or an external meter to find the average exposure settings.

Start at one stop brighter than the average meter setting and take a series of photographs, without varying the composition, stopping down the aperture by half a stop each time.

The result will be a sequence of 5 photographs differently exposed from bright to dark.

I chose to photograph a red t-shirt, not very imaginative but a strong colour, stretched over the back of a chair to keep it flat. I place the chair near a window to gain some additional light. I positioned my camera on a tripod, then selected Manual mode as this provides an exposure indicator in the viewfinder. I kept the ISO setting constant at ISO 100 and the WB set to shade throughout.

The exposure indicator recommended an aperture setting of f/7.1 and shutter speed of 1/10s. As I usually have my camera set in increments of 1/3 of Exposure Value (EV), I varied aperture setting by 1/3 of a stop each time, ranging from 1 stop below the average reading and 1 stop above. This resulted in 7 differently exposed photographs, rather than the 5 required for the exercise.  I also took hue, saturation and brightness (HSB) readings from the centre of each photograph using the information window in Photoshop Elements 11.

The photographs below are RAW files with no adjustments made.

At one stop over-exposed the red appears very bright and light. The middle of the photograph has a slightly washed out red colour when compared to the slightly darker left hand corners. The left hand side was furthest away from the window so this received less light.

At 2/3 of a stop over-exposed the red appears slightly darker than previously although still brighter than the colour of the actually t-shirt.

At 1/3 of a stop over-exposure the colour is becoming more of a true red and retains brightness over the majority of the frame. This is probably the closest match to the true red colour of the t-shirt being photographed. 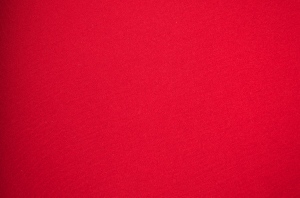 The metered exposure seems to provide a more evenly spread red hue across the frame than any of the other exposures. The shadow areas are far less noticeable. The red is very strong and much darker than the previous exposures.

1/3 of a stop under-exposed has made the colour stronger and darker.

In this exposure the red colour is very strong, the red appears mostly dark with no obvious areas of brightness.

At 1 stop under-exposed the colour is a very dark red, which bears very little resemblance to the colour of the original t-shirt. In the left hand side of the frame and the corners the red is approaching black.

Looking at the HSB figures was interesting as it’s not something I have ever done before. The hue values remained fairly constant throughout, ranging from 346° to 352°. There was also little variation in saturation levels, starting at 94% and quickly rising to 100% at 2/3 of a stop under-exposed. However there was a notable difference in the brightness levels recorded throughout the exercise. 93% was recorded at 1 stop over-exposed and this dropped to 57% at 1 stop under-exposed. This illustrates quite well that under-exposure (less light) affects the brightness of a colour, making it appear stronger and more intense, while the hue and saturation levels are relatively unchanged.

I wondered how this would compare with a different colour? I decided to repeat this exercise with the colour yellow to see if there would be a difference under similar light conditions.

I photographed a bowl of lemons, positioned by a daylight window. I again used manual mode of my camera and used the in-camera meter to find a recommended exposure. The camera recommended f/10 and a shutter speed of 1/25s. I adjusted the aperture to 1 stop over-exposed, f/7.1 and began to expose from bright to dark.  Again, I positioned the camera on a tripod, kept the ISO constant at ISO 100 and took HSB readings from the centre of each RAW file. The background is yellow card.

The yellows in this photograph appear very bright and not too white even though the in-camera meter reads 1 stop over exposed. There are a few highlighted areas where the light hits the lemons, top and left, making the yellow appear ‘shinier’. 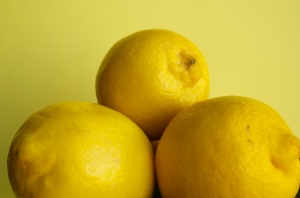 The yellow is slightly paler here, with less highlighted areas and a more even tone overall. The shadow areas are still quite soft. I find the colour here more pleasing than the in-camera meter recommended exposure below.

The colour of the lemons appears darker and the background colour seems to be developing a ‘greenish’ tinge.

The meter recommended exposure is very dark and there are many shadow areas. The yellow of the lemons is not bright. When looking at the histogram for this shot it shows an under-exposed image with clipped shadows.

The image continues to lose brightness as the aperture gets smaller.

At one stop under-exposed the colour of the lemons is barely discernible.  The yellow has lost most of its brightness and is gradually becoming darker and some areas appear almost black.

On repeating this exercise, I noticed that both the hue and saturation remained constant while the brightness fell by 50%, from 77% to 27%, in 2 stops. This makes it easy to see how brightness relies on light levels and renders a colour dark in low light conditions. It also illustrates how a hue value can remain constant while brightness levels change.

The course notes stat that slight under-exposure can help produce a ‘stronger’ colour, as can be seen in the 1/3 and 2/3 under-exposed red t-shirt photographs above. This didn’t seem to be the case for the bowl of yellow lemons. The main effect under-exposure had was to lower the colour’s brightness and render parts of the image almost black.

Interestingly the saturation levels for the yellow (in this example) where at 100% throughout this experiment in brightness levels ranging from 27%-77%, although I’m not sure if those figures are a typical representation.

In addition to learning how colours change with camera exposure, I have noted that the in-camera meter recommended setting for the lemons, resulted in a photograph that was noticeably under-exposed. This is something I will have to remain aware of in future and not rely solely on this tool, instead using it in combination with the camera histogram and LCD playback to plan and check exposure.