This is the first exercise in the Project: The Colour of Light. The project begins by describing what light is, from a scientific perspective.

Light, like radio waves, x-rays and radar is a type of energy called electromagnetic radiation. Radiation is defined by wavelengths, which vary in length of frequency, from high to low. The majority of the wavelengths on the Electromagnetic Spectrum are invisible to the human eye, such as x-rays (high frequency, short wavelengths) and radio and TV (low-frequency, long wavelengths) (Präkel, 2007, p12).

The light that we can see concerns only a small part of the spectrum. It is seen as the colour of the rainbow. First as a deep red and then as the wavelengths continue to reduce in length, yellow, green, blue and violet can be seen. After violet the radiation becomes invisible as UV light.

This is illustrated in the diagram below.

Our eyes combine the six colours to see ‘white light’. This colourless, ‘white light’ is used to describe standard sunlight in the middle of the day and is measured at a colour temperature of 5500K.

Colour temperature measures the ‘whiteness’ of light and is measured in kelvin, shown as K. (Präkel, 2007, p20). This scale directly relates to the idea of the colour change seen when heating an object. Thus I found it interesting to note that red would have a lower colour temperature than orange, blue or white. Slightly confusing, as the last chapter in TAoP looked at red and orange as being hot colours and blues as cool. However, it is important to distinguish between colour associations and the measurement of colour temperature.

Light stops being white and becomes a colour when some part of the spectrum is missing. This happens because the atmospheric particles scatter some of the light wavelengths, particularly at sunrise and sunset. The shorter wavelengths, blue, get scattered more easily and makes the sky appear blue. The longer wavelength colours do not scatter so easily, so remain visible. This, weather permitting, can result in a yellow, orange and red sunset.

Rather unsurprisingly, the temperature of light changes throughout the day. Therefore this exercise asks us to look as these variables when learning to gauge colour temperature. The instructions for the exercise were as follows:

I chose a small, off-white Buddha statue I had at home for a subject and selected a position in front of my building. It was a clear, cloudless day and extremely hot. I took three photographs as directed with daylight WB. I opted for RAW format.

The first shot was taken at 11:30am when the sun was high and the temperature was 42°C. Full midday sun is described as white or colourless and in this image it has had the effect of bleaching out the statue and surrounding brick work. The colours of the background are pale and uninteresting. The overhead sun has also resulted in highlight spots on the Buddha’s head shoulders and stomach. 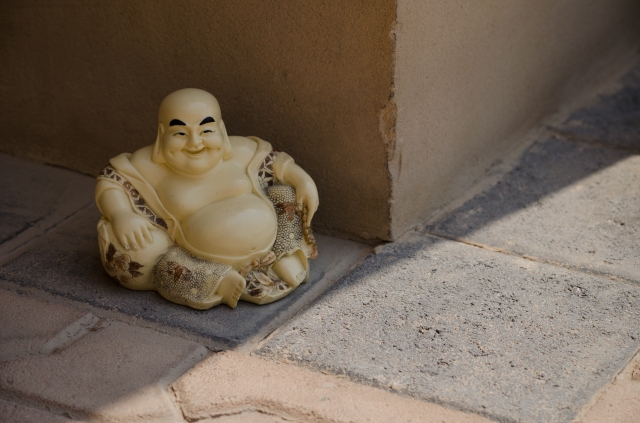 The second photograph was taken at 11:31am with the statue placed in the shade. Shade has a higher colour temperature than ‘white’ day light and contains more blue light. This can be seen in the colour of the stone work and also to a lesser degree on the statue.

The third photograph was taken at 18:04pm, half an hour before sunset. The light has given the image a yellow/orange tone. While the setting sun has a cool colour temperature it, somewhat ironically, appears warmer to look at. Of the three images, this is my favourite as the low side lighting has lit the Buddha well, while casting an interesting shadow which helps to balance out the composition.

This exercise has helped to show that the time of day has a strong effect on the colour of light, which can be seen in both the statue and the surrounding brickwork.

Although I feel as though I need more experience in being able to judge the colour of light reliably, I do feel that reading more about the scientific explanations of what light is and how it behaves has been useful. I knew that early morning and early evening are considered to be the ‘golden’ time for photography but previously didn’t understand it was due to both the temperature of the light as well as the perceived associations with temperature.

This has given me a good foundation to build upon when undertaking the next exercises on Light and the subsequent assignment.